ProPublica Illinois is a nonprofit newsroom that investigates abuses of power. Sign up to get weekly updates about our work.

This story is a collaboration between ProPublica Illinois and the Chicago Tribune.

Nearly two months into the school year, Illinois public health officials said they have verified COVID-19 outbreaks in at least 44 school buildings across the state, but they declined to say where those cases occurred and acknowledged they may not know the full scope of the virus’s spread in schools.

Unlike many other states, Illinois doesn’t publish the number of cases linked to schools or which schools have been affected — even as parents and educators try to assess whether in-person learning is safe. State health officials released overall numbers at the request of ProPublica Illinois and the Chicago Tribune.

With more than 1,800 public schools operating in person at least part time, along with an unknown number of private schools, the outbreaks represent a tiny fraction of Illinois schools in session, according to an analysis of state education data. Most outbreaks have been small — two or three cases at each school — but at least 105 students and 73 employees at public and private schools have been affected.

Native American students in BIE operated schools were forced to start the school year without adequate technology, sometimes sharing a single computer among siblings, because the agency disbursed funding late and failed to purchase equipment in time.

Many school districts gave parents a choice between in-person classes and e-learning but allow them to switch only during school breaks, including at the end of a grading period. For both parents and school officials, it would be helpful to know more about virus transmissions at schools, one parent advocate said.

“Parents are in the dark about infection rates. How can we make an informed decision about whether or not to send our kids back to school when we don’t know how it is actually going at the schools that have returned to in-person school?” said Mary Fahey Hughes, a parent liaison for Raise Your Hand for Illinois Public Education, a parent group that advocates for public education.

Michigan provides weekly updates on outbreaks in schools throughout the state, and Gov. Gretchen Whitmer’s administration recently ordered schools to notify the public within 24 hours of any confirmed student and staff coronavirus cases. The push for transparency came from the Michigan Association of Superintendents & Administrators, among other groups, after inconsistent reporting by schools.

“The only way to get through the pandemic is using transparency,” said Peter Spadafore, deputy executive director of the Michigan superintendents group. By publishing statewide figures, school leaders “can begin to understand what measures were successful in mitigation and stopping outbreaks.”

“When we talk about returning to school in person … we then have a lot of data to understand what works and what doesn’t,” Spadafore said.

Emily Oster, a Brown University economics professor, has been working with school administrators across the country to create a national dashboard to track the virus’s spread. Participation in the dashboard is voluntary; about 115 Illinois schools are included so far, with 0.13% of students testing positive in late September, about the same as the national rate.

“If we don’t have public accountability reporting, people don’t know what is going on. That is making it hard for them to make choices,” Oster said. “There are a lot of states and places that are hiding behind privacy, and the push I keep trying to make to people is it would be good to release this data.”

Nationally, cases among children and teens peaked in July, declined in August and then started rising again in early September, according to a recent report from the U.S. Centers for Disease Control and Prevention in Atlanta. Infection rates were twice as high in teens as they were in children. The CDC said that in-person learning can be safe when community transmission rates are low, but that it could increase risk in communities where transmission is high.

Illinois data suggests that many cases among teens involve outbreaks at colleges, not at K-12 schools. There were 15,464 confirmed cases among people younger than 20 between Aug. 16 and the last week of September, according to IDPH. But in roughly the same time period, the agency documented only 178 connected to K-12 schools.

Large outbreaks on university campuses in Illinois and across the country have been documented, though, contributing to case spikes in college towns.

For example, cases have surged recently among younger people in McLean County, in central Illinois. But Jessica McKnight, administrator of the county health department, noted that many of those cases were in the 18- and 19-year-old range. Illinois Wesleyan University and Illinois State University have both reopened in the county.

She also said most of the virus spread in K-12 children so far has been tied to community sports and other gatherings unrelated to school.

“We’re making it as safe as possible within the walls of the school,” McKnight said. “You have control over what happens inside the building. It’s outside the building … that may be more concerning.”

School districts have taken varied approaches to informing their communities about COVID-19 cases. While some publish real-time dashboards, others alert parents only with form letters when a positive case is discovered. Some send out periodic updates tallying the week’s cases.

North suburban New Trier Township School District 203 updates an online dashboard twice a week with the number of staff and student COVID-19 cases, as well as the number in quarantine. After starting remotely for all but select students, the high school reopened Monday with 25% of students in person at a time. As of Wednesday, there were five positive cases among students and none among staff, according to the district. Nearly 60 students and 13 employees are in quarantine, according to the dashboard.

Mike Sutton, superintendent of Highland Community Unit School District 5 in Madison County, near St. Louis, doesn’t publish a dashboard but sends families a weekly summary with a tally of the week’s confirmed COVID-19 cases. He said there have been about 25 confirmed or presumed cases in the district since the school year began.

“This has not been ideal, but we believe that’s how important it is to have kids in school,” Sutton said. 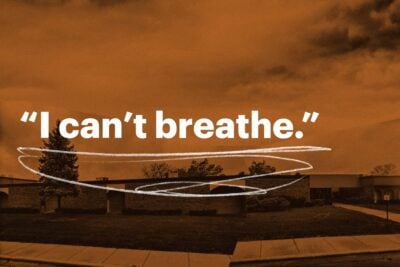 “I Can’t Breathe.” It Happens at Schools, Too.

Students in Illinois schools said “I can’t breathe” while being restrained at least 30 times over the time period we investigated, according to our analysis of the records. The practice of face-down restraint is still legal in Illinois.

In west suburban Geneva District 304, about 5,500 students and staff members have been learning in person since Aug. 31. There have been 26 confirmed COVID-19 cases among students and school workers, though none of the cases is linked to exposure at the schools, according to district spokeswoman Laura Sprague.

“These confirmed cases are from community-based exposure rather than in our schools, which shows the health and safety precautions we put in place are working,” Sprague said.

Students and staff wear masks during the school day; families are required to complete a daily symptom screening and certify that nobody in the family has COVID-19 symptoms. District officials email families and staff whenever they learn of a positive case in the school community, Sprague said.

Olympia District 16 in McLean County publishes its own online dashboard that updates daily.

“Being transparent with numbers, cases, etc., has helped and our staff has been positive about being in person,” said Laura O’Donnell, the district’s superintendent.

County health officials said they reviewed districts’ return-to-school plans and made suggestions when necessary, and they have advised districts what to do when they have had positive cases.

In St. Clair County, in southern Illinois, school officials alert the health department when someone tests positive and they work together to trace exposure. Some school employees have taken the county’s contact tracing course to understand the process, said the health department’s executive director, Barb Hohlt.

The county, like others across the state, does not publish the number of cases tied to schools, Hohlt said.

“We will follow the lead” of the state health department, Hohlt said. “We are leaving it up to each school (to decide what to disclose about) cases in a school. We will inform parents or teachers or employees only if there is a need to know they have been involved in a case or contact.”

Statewide, there have been 307,641 confirmed cases of COVID-19 and 8,878 deaths attributed to the virus as of Wednesday.